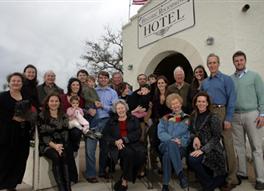 Craig Wolcott is a 5th generation Texan, and is a descendant of William Henry Wolcott, who came to Texas in 1853.

William's sons, Benjamin and George, established the first ranch in Midland County in 1884. Ben was a progressive rancher who was credited with introducing the first windmills into Howard County and Midland County.  Ben's son, Edward Wolcott, continued ranching in Martin County until his death during a round up in 1932.

Craig was born in Houston in 1953. He attended public schools, and graduated from the University of Texas in 1976. While working in construction, he attended law school at night. He graduated from South Texas College of Law in 1983.

Craig worked at the Houston law firm Hays, McConn, Rice & Pickering, as a law clerk, an associate, a partner, and management committee member, from 1982 through 2012, with an active personal injury and civil trial practice. In 2012 he opened his own law practice in the Texas Hill Country. In 2020, after an invigorating seventeen month hiatus with a major personal injury law firm in San Antonio, he re-opened his law practice in Kerrville.

Debra and Craig Wolcott were married in 1979. They have four grown children: Anna Lee, Sarah Claire, Laura Jane, and Clay. The Wolcotts own and operate The Historic Rocksprings Hotel located across from the courthouse square in Rocksprings, Edwards County, Texas. The hotel is also home to the family Cairn Terrier, Kelso.

for your legal needs?